Coming out would be hard enough once, but it’s actually a life-long process

Here I am in Leamington Spa, my hometown. I’ve returned to the motherland, complete with a new Morrisons superstore and prepubescent fashionistas on every corner. A more accurate title for this piece would have been ‘My Constant Coming’, but I fear this would have conjured up far too many unpleasant and frankly terrifying images.

To be clear, I am referring to the many occasions in which I have come out, as a lesbian, in the years since I first sat myself down and admitted that I didn’t just like staring at that teacher because ‘If I were older we would be friends’. So, so sad.

Despite acknowledging this to myself fairly early on, I would describe my university years as my first real foray into coming out territory. It was during this time that I first told my parents, and finally said ‘enough of this silliness’, and told my friends. I began to relax, to feel comfortable in my identity and became satisfied with the conclusion that I really didn’t give a rat’s arse about what anybody thought. Hooray for happiness!

Such was the nature of my first coming. Overall, a lot of unbelievable emotional turmoil followed by a lot of nothing; the really good kind of nothing that follows from telling knowledgable people a fairly banal bit of trivia. “Did you know that the only disease more deadly than Ebola is Rabies?” Cue disinterested nods.

However, not all of my comings have been so satisfying (ahem). Since returning home, I’ve encountered the uncomfortable truth that, despite feeling super gay at all times, not everyone actually knows! This was a genuinely shocking revelation to me, delivered kindly and with a wry sense of irony by my mother: “Sophie, you’re so aware of gay things [yes, things] but you forgot you have to come out!” Ha ha ha, cue much merriment. But she had made a serious point; when you’re gay, you have to come out all the time. To everyone you meet, on any given day. 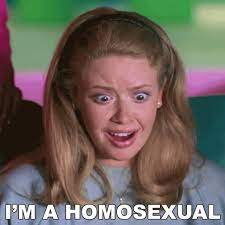 It’s not easy. Coming out takes courage. It’s different for everyone, but making the effort to announce your sexuality on an almost daily basis can be tiring. It can even be completely demoralising. It’s not any reflection of my feelings about my sexuality to say that I hate coming out – it’s just a genuine pain in the arse. Whether it’s dropped casually into conversation or the result of a day of hyperventilating and manically baking six dozen mince pies (true story), coming out is a tough business.

My advice? Don’t ever underestimate what it takes for someone to come out to you. Whether or not it is a ‘big deal’, it is still important. Don’t say, “Yeah, I already knew” or “But you’re so pretty.” Don’t ask whether they’re a top or a bottom, or if scissoring is a real thing. Just be kind. There is no right thing to say, just use a little empathy. It’s hard, but a friendly face can make all the difference. And the constant coming is so much more satisfying.